The Mayor's Office of Neighborhood Services hosted a community meeting on Baystate Herbal Solutions' proposed cannabis dispensary at 464 Hanover Street tonight. The meeting was well attended and the City's Zoom cap of 100 was met before the six o'clock start time even rolled around.

Ciara D'Amico kicked things off with a warning about being respectful and turned it over to Herman from Baystate Herbal. Herman gave a professional presentation complete with swooshy graphics. We learned about the team - especially owners Malik Hayat (owner of Blue Moon International) and Liam Bennet (a medical user of cannabis since his teens). Bay State also made commitments (mostly required by the CCC) around diversity and operational security. The presentation was less than 15 minutes and didn't contain anything surprising (other than a rendering showing a lime-green exterior which many attendees took offense to).

On to Q&A! Or, more accurately, comments from the opposition since most didn't ask any questions and no attendees spoke in support of the proposal.

The opposition could be loosely grouped into three cohorts:

Many attendees fell into more than one group.

As anticipated, several people brought up the proximity to the Eliot Lower School. Baystate Herbal had a representative from Fuss & O'Neill who informed us that the survey is in and the official walking distance between entrances in 557 feet - putting the proposed dispensary 57 feet outside the buffer zone. Baystate Herbal promised to make the survey, which was just completed six hours before the meeting, available to the public. One attendee questioned whether the spirit of the regulation - which is to shield children from exposure to dispensaries - was being met. The Prado, for example, acts a de facto extension of the Eliot School playground and is also where Eliot School busses do drop-off and pickup.

Baystate Herbal made non-specific promises to be generally financially charitable towards various North End organizations. One attendee posited that, due to the federal status of marijuana as a schedule 1 drug, Baystate Herbal would be unable to have a bank account. This would prevent them from making charitable donations since non-profits can't accept cash donations. Baystate assured us that they would do their banking with a credit union.

The most common theme was that the North End was a bad location for this business and that Baystate Herbal simply wasn't welcome here. Some attendees vowed to prevent Baystate Herbal from opening their dispensary at all costs. Restaurant owner Damien DiPaola, "Mark my words: We're not gonna let you in". Neighborhood Council member Tania Green asked for Baystate Herbal to spell out all of the steps in their process so that she could make sure she was there to "battle".

Lots of folks expressed frustration with the way that the Baystate Herbal team interacted with the meeting attendees. Again, Tania Green in the chat,:

This woman’s attitude needs a major adjustment. State the facts without the attitude. Good start.

An especially combative resident of 464 Hanover, Christine, asked the Baystate Herbal folks how close they lived to a dispensary and what it would do their property values if they did. Baystate Herbal reps and Christine never really got a word in as they accused each other of cutting interrupting. David Chinn quoted a 2020 Boston.com article "Do marijuana shops drive down home values?" in chat:

[Property] values increased by $22,888 between 2014 and 2019 in cities with pot shops compared with communities where marijuana is illegal

[ed. note: How much did values increase in communities where marijuana is illegal? The boston.com article makes no sense to me.]

Competing for the the "Not knowing your audience award", one Baystate Herbal representative compared their company with Airbnb, which was a blight on the neighborhood until its investor units were largely shooed away. She also asked the crowd, "what would you like to see here?" which triggered a flood of great examples.

Ciara called on Damien a second time to be the final speaker 🔨. Damien asked two questions:

Baystate Herbal reps seemed unfazed by both answering "Yes, that's public record" and "Because I'm a young person who wants to be successful" respectively. 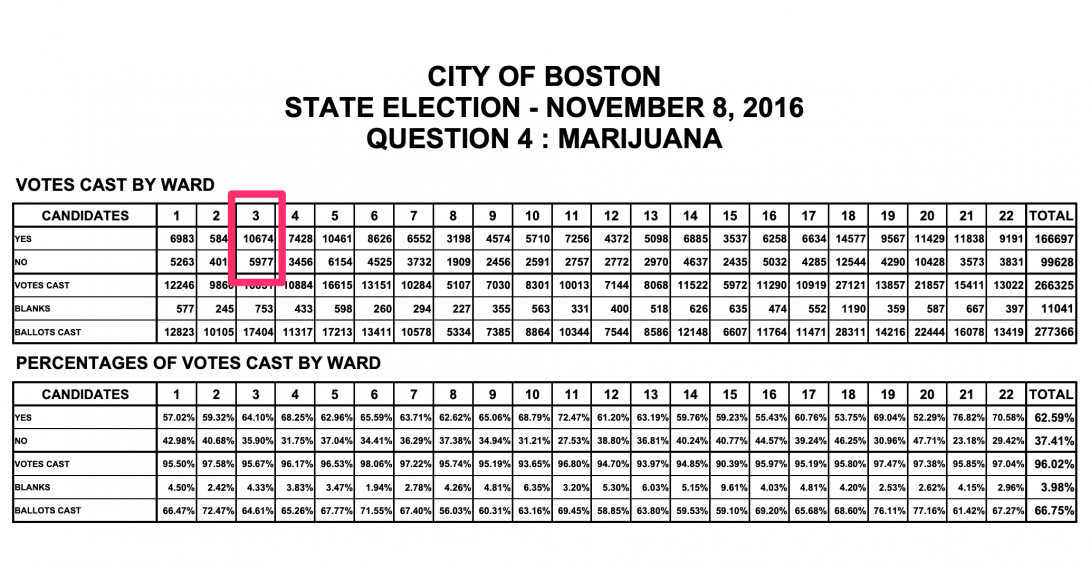