Geometric Centers, Impassable Barriers and how they relate to the pot shop proposal 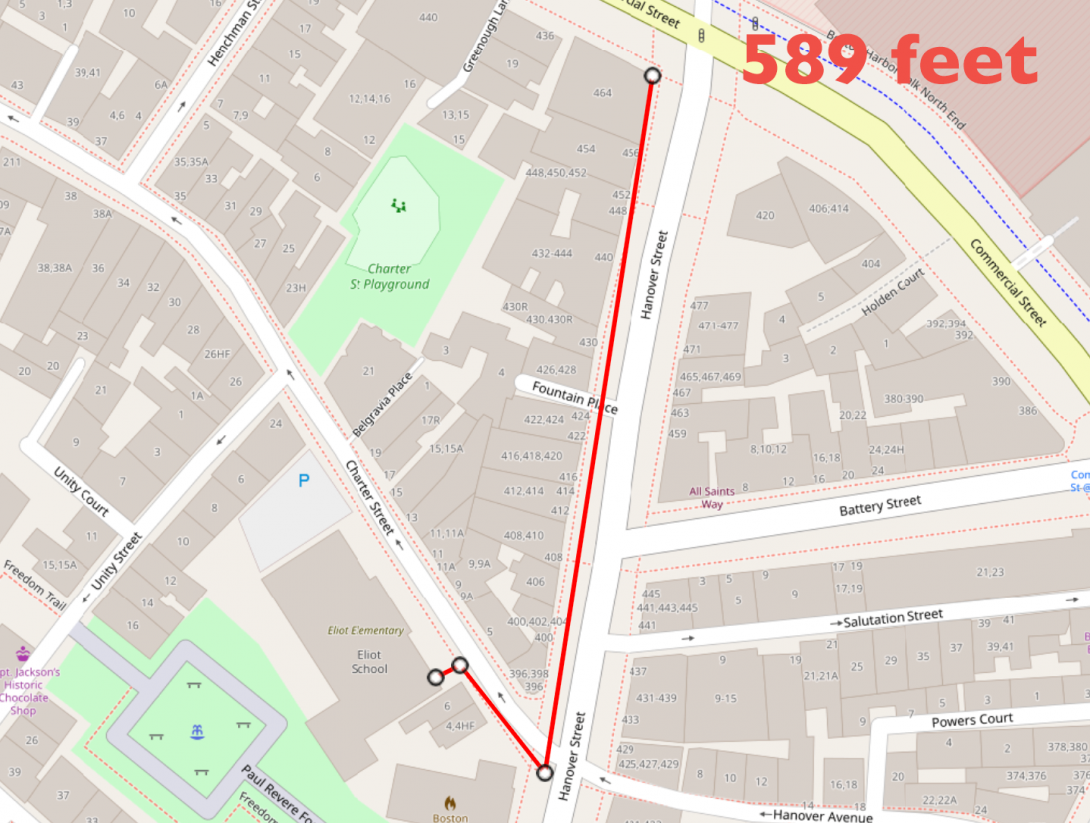 Tonight's community input meeting on Baystate Herbal Solutions' proposal for a dispensary at the former 7/11 will likely feature lots of discussion on the proposed location's proximity to the Eliot school on Charter Street. Specifically, whether the pot shop falls within the 500 foot buffer zone prescribed by the Code of Massachusetts Regulations on Adult Use of Marijuana.

I was curious myself, so I did a bit of research. Obvious disclaimers about my (lack of) background and correct interpretation apply.

What the CMR says:

The CMR is pretty specific about what constitutes an "Impassable Barrier" too - and it's not just buildings:

Impassible Barrier means, for the purposes of determining the 500 feet buffer zone, a highway, public or private way or path, inaccessible structure, body of water, or other obstruction that renders any part of the 500-foot straight-line distance between a Marijuana Establishment Entrance and a School Entrance inaccessible by a pedestrian or automobile.

In this definition, Charter Street itself (as a public way) is an impassable barrier where there isn't a crosswalk. Effectively, the shortest publicly-accessible pedestrian travel path from the proposed dispensary to the (nearest) entrance to the Eliot school is to:

Using three simplified line segments (that is, the absolute shortest distance not taking into account the contours of of the buildings, the exact locations of sidewalk ramps, or navigating the stairs at the Eliot School entrance) the rough distance from entrance to entrance is roughly 590 feet - comfortably outside the 500 foot buffer.

If we were to somehow remove Charter Street and the cars parked on the North Side of it as a barrier - effectively cutting the corner in front of My Cousins Place, it would actually be very close, but still outside the buffer, at 507 feet. 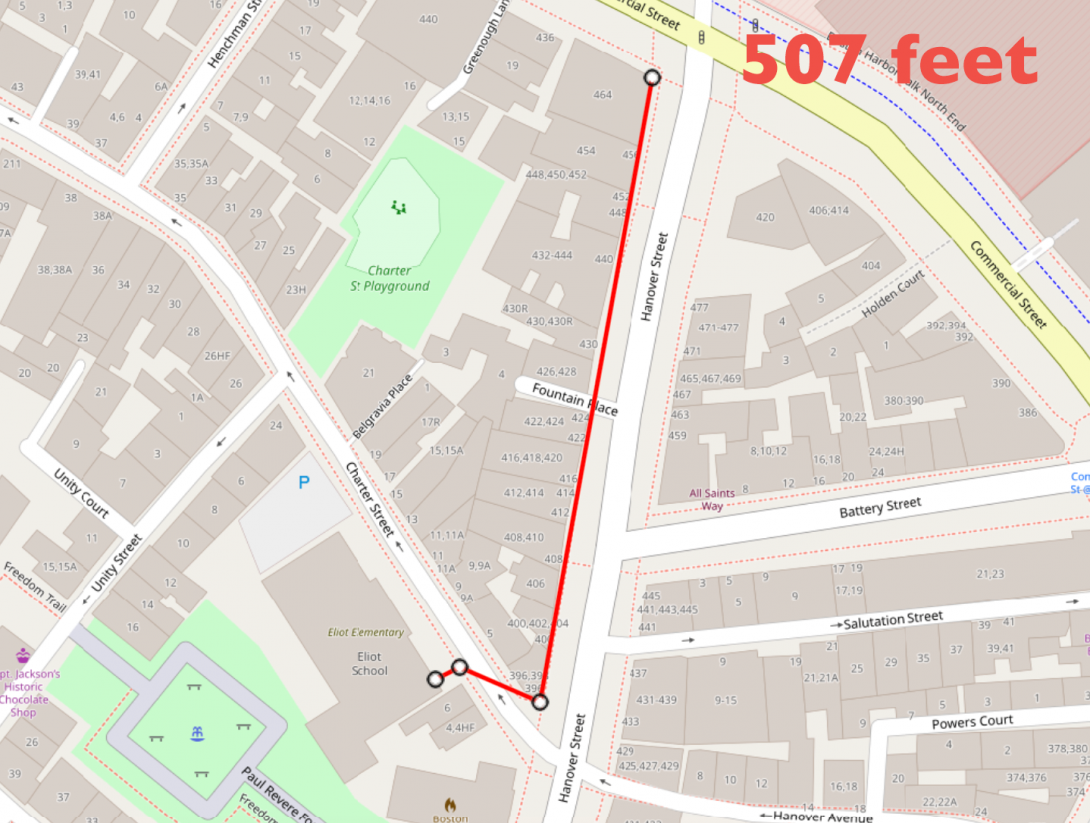 Cutting the corner, walking through the parked cars, and jaywalking isn't enough to get the building within the 500 foot buffer

Before you ask, using Charter Street Park doesn't work either mostly because there is no crosswalk at Unity Street. But even if we were to again ignore the impassable barrier, this route is still ~50 feet outside the buffer. 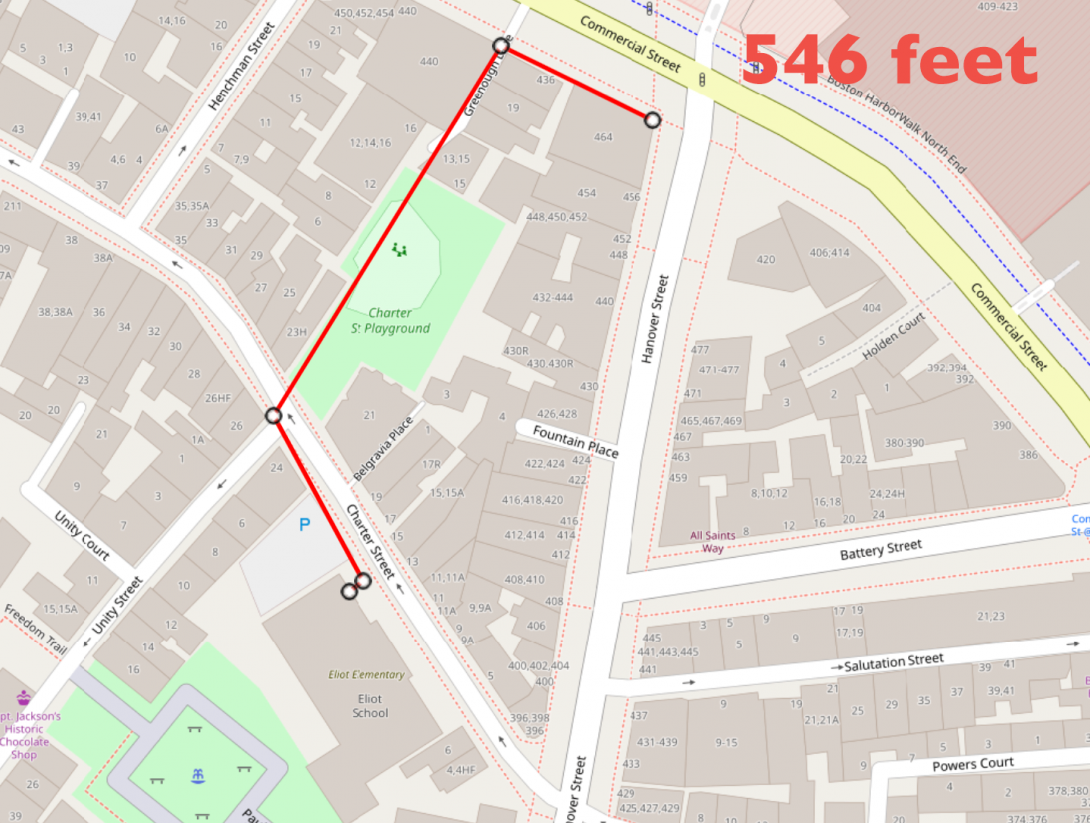 There's no crosswalk at Unity Street - but even if there was, it's still 50 feet outside the buffer going this direction

Note: None of these maps were generated via a survey. The tolerances for the tools used are well within the buffer of the measurements above 500 feet. In other words, I wouldn't expect a proper survey to conflict with these findings.