A deeper dive into the unsafe pedestrian conditions at Keany Square 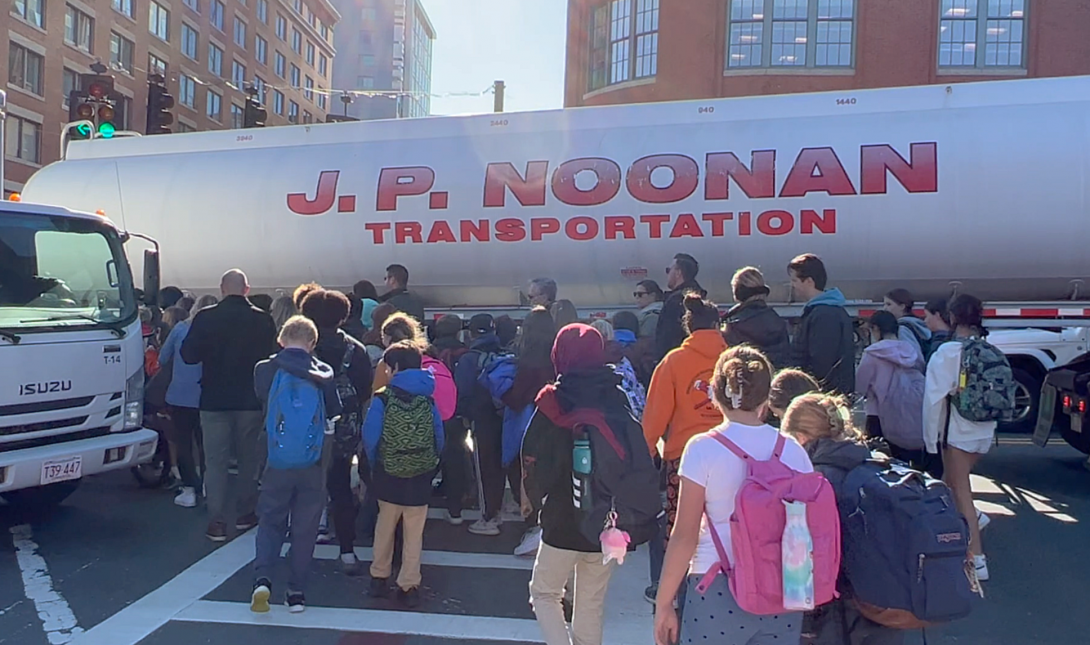 Recent news that the temporary North Washington Street Bridge and resulting pedestrian detours will be around for at least another 13 months has sparked outrage from vulnerable road users. I decided to take a closer look at the current conditions.

In mid-2019, MassDOT closed the walkway on the East (harbor) side of the bridge. This closure means pedestrians traveling between the North End and Charlestown must cross North Washington Street on both sides in order to use the bridge. Under the current configuration, that's 13 lanes of traffic altogether (seven on the North End side and Six in Charlestown).

This detour was originally scheduled to last 15 months. It's now been 42 months. In recent weeks, MassDOT informed the public that it will be at least another 13 months before pedestrians traveling between Charlestown and the North End can use the bridge safely.

After a child walking to school was nearly run over on the Charlestown side in 2021, the City asked the contractor to A) Close the slip lane onto Chelsea Street and B) Increase the length of the pedestrian phase at City Square. These minor changes have made the Charlestown crossing marginally safer. So I'll focus on the Keany Square (North End) side for the rest of this article.

Pedestrians can't make the crossing at Keany Square (the North End side) in a single phase. They must:

This is where the real problems start.

The crosswalk during the seven-second pedestrian phase is invariably blocked by motor vehicles. Most often, it's blocked for the entirety of the 18-second clearing phase as well. This leaves pedestrians with no choice other than to snake their way through the phalanx of vehicles - praying that they will be seen, even when the operator of the often massive vehicles have zero visibility of the crosswalk that they're plowing through.

Actually, the other choice pedestrians have is a strength-in-numbers takeover of the intersection when the crosswalk clears of vehicles. This exact scenario happened today when dozens of Eliot school children commandeered the intersection during a non-pedestrian phase. It was the only time the crosswalk was free of motor vehicles and seemed to be by far the safest opportunity to actually get to the other side. Amazingly, this was what motivated the detail officer to finally exit the patrol vehicle he had been sitting in. (He was unmotivated to help out - or even get out of his patrol car - while the J.P. Noonan truck above rolled its enormous tires past school children during their walk phase, or for any of the other six light cycles I observed today.) At this time, the officer shut down the impromptu appropriation and restored the status quo of breathtakingly dangerous motor vehicle dominance.

Detail officer gets out of his car to restore gridlock

Wait, there's a cop detail there?

Meeting Attendee Jade Figueiredo: we do not have consistent crossing guards [...] and these kids are dodging big mack trucks

Sgt. Paul Chevrette: Those assignments [for a police detail] are in and as far as I know, with the crossing guards, if you guys know anyone that's willing to work as a crossing guard, we are taking applications.

Side note: I have known the crossing guard that was previously assigned to the Keany Square intersection for twenty years. If he can't handle the traffic there, no civilian can. This is a job for a police officer. Apparently, we're already paying for one to be there, we just need Sgt. Chevrette's officers to, you know, actually get out of their patrol cars and help.

Several parents I spoke with confirmed that on the rare occasion a police office is present, they are almost always in the patrol vehicle - not on the ground helping people to cross safely. I also spoke with a second-grade teacher at the Eliot school that confirmed the detail officers don't help her either:

We've been on field trips with three teachers and 80 kids. And the police officer just sits in his car watching his phone while we try to navigate around cars running red lights.

Sadly, with or without police details, motor vehicle operators in Boston pay almost no attention to red lights at pedestrian crossings. This is the next signalized intersection up Commercial Street today, 500 feet from Keany Square:

Trying to cross Commercial at Charter. Note the walk signal.

Here's Cross Street at the other side of the North End:

Perhaps most frustrating is the sense of complacency and lack of urgency from our elected officials, MassDOT, and BPD. No one from Gabby Colletta's or Lydia Edward's office were present at Tuesday's meeting. A rep from Aaron Michlewitz's office was there, but contributed nothing. Same with the Mayor's ONS rep.

We've tried nothing and we're all out of ideas.

I'd argue there is another idea untried yet. Run the MBTA's 93 bus a lot more frequently between the Haymarket and Sullivan stations. This will provide a safer crossing between North End and Charlestown, negating the need to cross the dangerous bridge crossing on foot, and reducing traffic congestion on the bridge by shifting local Charlestown - North End commuters from car to bus. Since, if the MBTA's 93 bus ran more frequently, the wait times will be a lot shorter and more convenient, so there's no need to drive a car, or walk, making the bridge safer and less traffic congested.

Public school students receive M7 passes free of charge for 1 whole calendar year, and children under 12 ride free, so the bus would be free for students.

The MBTA reduced bus service on the 92 and 93 bus routes by over 40% across all 7 days of the week compared to pre-COVID. It means longer wait times and slower bus service between Sullivan and Haymarket.

Which forces people to make this dangerous bridge crossing on foot as a pedestrian, and entices more people to cross this bridge by car, increasing traffic congestion and danger to pedestrians.

MBTA really needs to step in if there’s going to be any way to improve this situation with the others. Such as closing this bridge to cars/trucks so only bikes, buses and pedestrians can use it. More bus lane enforcement, or increased bus service on the 93 between Sullivan and Haymarket by doubling the 93’s frequencies 7 days a week; so people can use the bus to cross this bridge instead of the dangerous pedestrian crossing or by car.

The bus lane will need much better enforement for this to work.

Please just make this intersection an all-way pedestrian cross (the way it is on the Charlestown side).

The bus lane on the northbound side of North Washington St needs to be enforced; so much of the gridlock comes from people bombing down the bus lane and then swerving over for the one lane bridge. If BPD actually enforced the bus lane from (honestly blanking here, Stillman St iirc) end to end it would help alleviate a lot of the box and crosswalk blocking that happens.

Yes. Not only just that, the MBTA would also be able to increase the frequency for the 92 and 93 buses if the bus lanes were actually enforced, which would allow more cars and pedestrians to switch over to using the bus and taking the bus between Charlestown and North End. Which would decrease traffic congestion at the bridge, decrease car traffic, and increase pedestrian safety and more safety for cyclists. And if more people took the bus, the MBTA would be able to increase route 92 and 93 bus service even more, and decrease traffic congestion further and increasing pedestrain and cyclist safety even more.